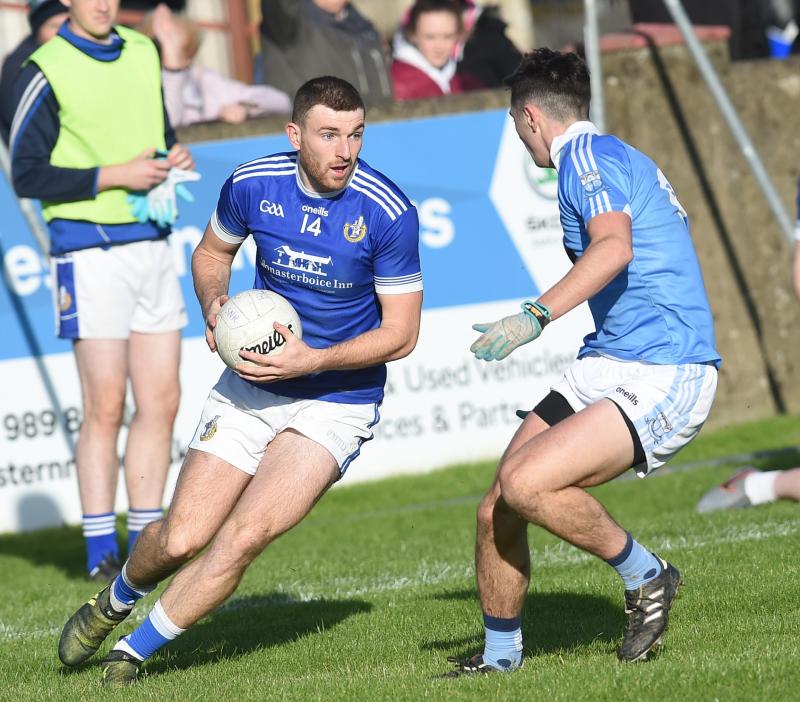 Naomh Máirtín's Sam Mulroy, who was in superb form last weekend hitting 1-7 as his side defeated the Dreadnots. (Pic: Arthur Kinahan)

A second half resurgence saw Naomh Mairtin open up their Senior Football Championship defence in Group D with a five point victory over the Dreadnots on Sunday evening.

With talisman Sam Mulroy helping himself to 1-7, the holders did enough to see off the tricky challenge of the Dreadnots, who led by 0-7 to 0-4 at the break thanks to the kicking of Peter Kirwan and Jay Hughes, and a splendid point from James Califf on the angle.

With the Martins slow out of the blocks, the Dreadnots turned them over and broke with pace. The Clogherhead men led by 0-3 to 0-1 after 12 minutes, with Jay Hughes (0-2), either side of a Paraic Smith effort giving their side early joy, with a classy point from Mulroy the sole response from the Martins.

Pat Lynch then set up Darragh Shevlin for another white flag, while further scores from Kirwan and Hughes helped the Dreadnots to lead by 0-6 to 0-2 after 20 minutes, with the possibility of an early championship upset a distinct possibility.

Two frees from Sam Mulroy did close that gap, before a wonderful kick from James Califf left just a kick of the ball between the sides at the break, despite the Martins having Conor Whelan and Stephen Campbell black carded during that opening 30 minutes.

The Martins had another gear or two to reach and they certainly reached it in that second half, with Sam Mulroy scoring 1-4 of their second half tally of 1-7. Mulroy also touched the ball 17 times over the hour, with Sean Healy and John Clutterbuck turning the screw.

This led to the game changing moment of the match, as Sam Mulroy seized on a loose pass from the Dreadnots defence, before firing the ball passed Ciaran Cunningham to level things up at 1-4 to 0-7 minutes after the restart.

The Martins kicked on from that, scoring seven points in a row as Clogherhead failed to register a second half score until stoppage time through two Jay Hughes frees.

The Martins pushed for home, winning six from 15 on the Dreadnots kickout with four further points from the boot of Sam Mulroy, two from Conor Whelan and a point from Wayne Campbell ensuring the Jocks’ victory in their first game in their bid to defend their Joe Ward crown.

Puppy 'kicked around like a football' rescued by shelter and gardai