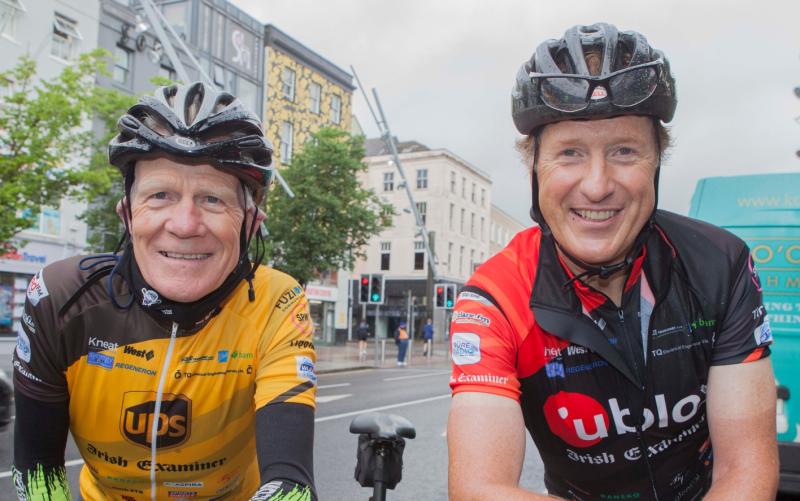 Christy Enright, from Fedamore, and Eddie Ryan from Douglas, formerly Limerick, who are taking part in the Tour de Munster

The event which began yesterday, Thursday, continues until this Sunday. The Tour helps raise vital funds and awareness for the Munster branches of Down Syndrome Ireland (DSI).

Today Friday's second stage of the Tour de Munster sees the cyclists go through Limerick, Clare and North Kerry and on to Tralee.

Saturday sees them face more big climbs over the Conor Pass and Molls Gap as they make their way via Dingle and Killarney toward Kenmare. Sunday, the final day, will start with a climb over the Caha Pass and finish in Cork city.

More than 150 amateur cyclists are taking part in the the 600km, four-day tour around the six counties of Munster.

Funds raised continue to make a tremendous difference to the lives of people with Down syndrome in Munster, as well as their friends and families by providing vital services and facilities in each county.

Tour de Munster organiser Paul Sheridan established the popular cycle in 2001, which has had a life changing impact on the lives of countless people through its fundraising efforts.

Tour de Munster has raised a significant sum of money for some very worthy beneficiaries along the way, raising over €3.4 million in total. For DSI Munster branches alone, the tour has raised a staggering €3 million since they became the main beneficiary of the Tour in 2010.

Speaking at the launch of this year's event, Ellen Tuffy, Chairperson of Down Syndrome Limerick said, “I'm delighted and honoured to be a part of such an amazing event. You can see year on year that the cyclists involved in the Tour de Munster are truly committed to the partnership between the tour and DSI Munster branches.

"We are very much looking forward to welcoming the 2021 Tour de Munster to Limerick this August. We are so thankful to Tour de Munster for their commitment to our charity and the help and support that they provide and we appreciate every cent raised. ”

The 2021 tour de Munster continues over four days around the six counties of Munster before returning to Cork City on Sunday.