Cashel Arts Festival 20th Anniversary - Fun and entertainment on the streets and sites of Cashel! 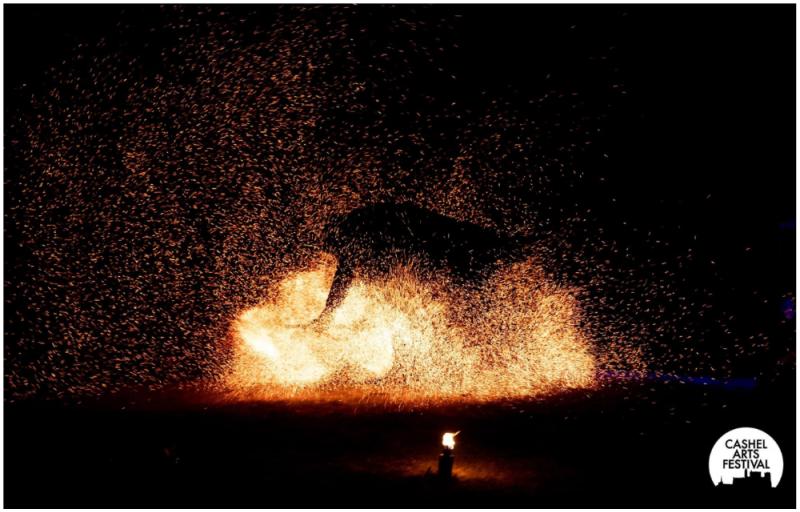 Cashel Arts Festival 20th Anniversary - Fun and entertainment on the streets and sites of Cashel!

This year marks the 20th anniversary of Cashel Arts Festival and the entirely voluntary committee has been working hard to bring a dynamic, fun and entertaining festival to the streets and sites of Cashel. This year’s festival will take place this month, from Thursday, 15th to Sunday, 18th September. Take your pick from music, dance, visual arts, film, theatre, workshops, family events and literature events. Involving and encouraging visitors and the local community to participate in a wide variety of arts is key to the festival. All the details of events can be found on our website, www.cashelartsfest.com, where the tickets for all indoor events can also be purchased. 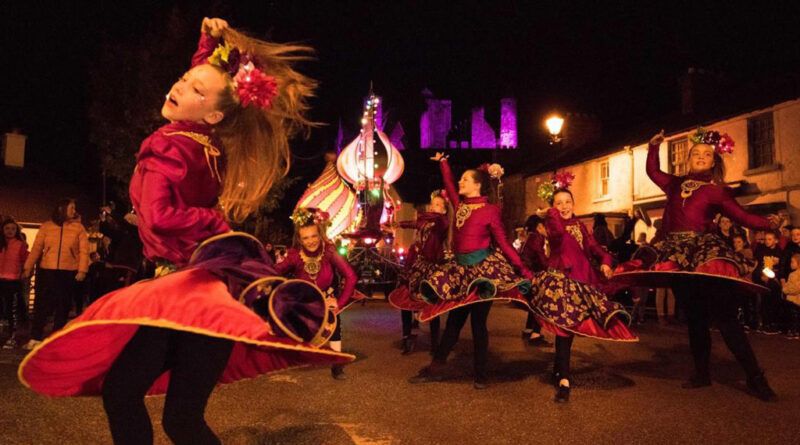 Last Friday, 2nd September, got our festival off to a promising start with the launch of our 20th anniversary brochure. Our sponsors and long time sponsors and friends of the festival gathered in Brú Ború, where we were treated to speeches from Cashel Arts Festival’s chairperson, Claire Gleeson and our County Cathaoirleach, Roger Kennedy. Then the local community was invited to enjoy some traditional music from a youth Comhaltas group, followed by a fire show act, FIRESTORM, with ROGU. This was vastly enjoyed by all who attended and even the rain didn’t put a stop to the fun! The brochure is available in many local shops and businesses now! 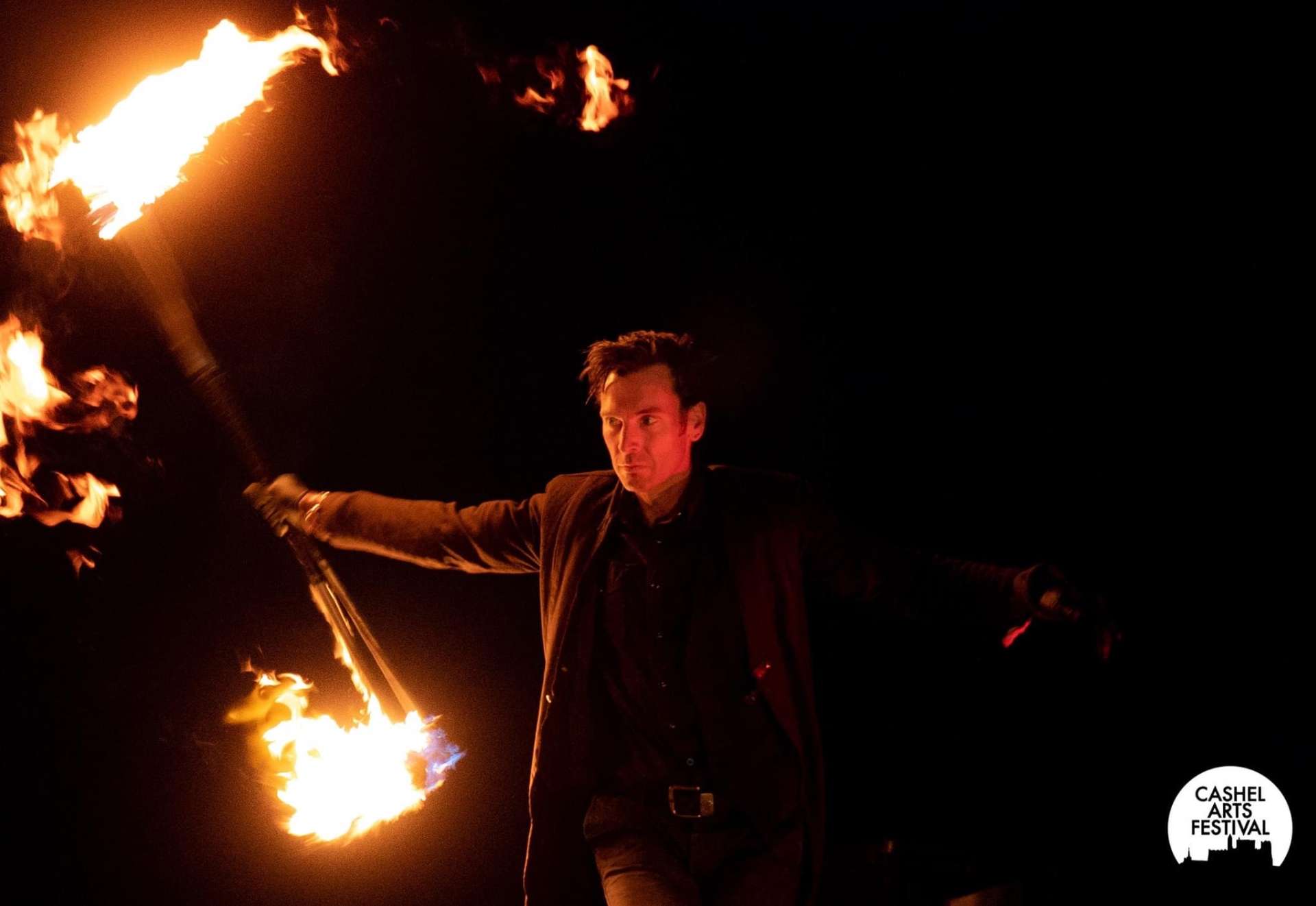 Kicking off our headline acts for our 20th annual festival is Me, Twice, a specially commissioned play by Cashel native, Eoin Gleeson. Me, Twice will premier as part of Cashel Arts Festival 2022. Eoin is a professional actor and playwright who trained at The Royal Central School of Speech and Drama in London. Eoin has had the privilege of participating in the Abbey Begins, a program for emerging playwrights, with the Abbey Theatre this year. His development as a writer has also been supported by the Arts Council in the form of the Agility Award. Me, Twice sees Aidan return home to his family in Ireland after two years of study in London. Upon returning he finds that his family have built a scarecrow in his place. His family and neighbours truly believe that the scarecrow is his exact look alike. Aidan can’t see the resemblance. He must bridge the gap between who he thinks he is and who his dearest thinks he is. This magnetic drama will take place on Thursday, 15th September in Brú Ború and tickets are available to be purchased online at cashelartsfest.com or from Brú Ború. 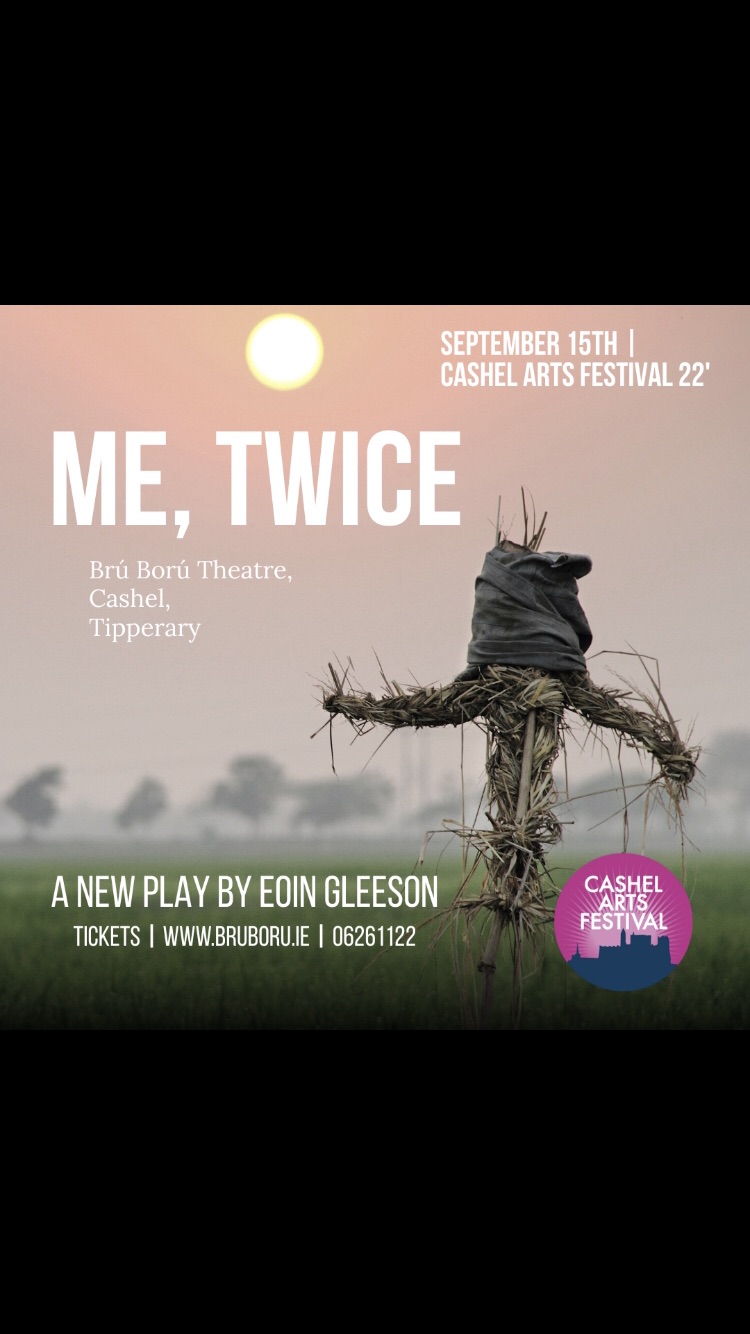 On Friday, 16th September, our festival parade will fill the streets of Cashel with music, dance, colour and fun! Everyone is invited to gather at St. John’s Cathedral at 7pm for a procession to the Plaza, where The Festival Parade will culminate with a special performance by Close Act Theatre from the Netherlands. Join us as enchanting phantoms stride elegantly through the streets, endowed with transparent wings which appear to float above the audience. For a moment they settle on the sidewalk to perform a handsome dance; both beautiful and bewitching. Watch as they spread their wings to finish the whirling white concert with a spectacular climax. This short, but impressive act is an audience favourite and will be sure to impress. White Wings can also be seen as part of the Craft Market on Saturday 17th September at 1pm and 3pm. 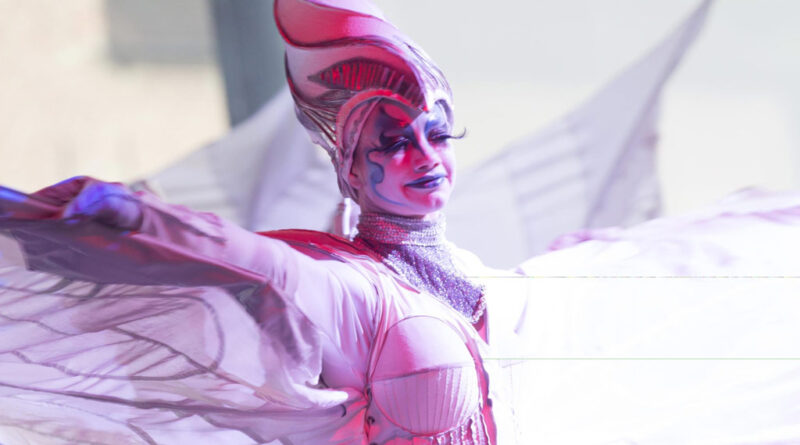 As part of the extended Bolton Lecture Series this year, we are delighted to welcome Lemn Sissay to this year’s festival. Lemn is a poet, playwright, artist performer and broadcaster. He has read on stage throughout the world: from The Library of Congress in The United States to The University of Addis Ababa, from Singapore to Sri Lanka, Bangalore to Dubai, from Bali to Greenland and Wigan library. His memoir My Name Is Why reflects on childhood, self-expression and Britishness, and explores the institutional care system he was raised in, race, family and the meaning of home. His moving, frank and timely story is the result of a life spent asking questions, and a celebration of the redemptive power of creativity. The publication is a Sunday Times number one bestseller and has been listed as book of the year in The Times, Daily Telegraph, New Statesman and The Herald. He was the first poet commissioned to write for the London Olympics and wrote the official poem for the FA Cup. His Landmark Poems can be found on walls in public spaces around the world from The Royal Festival Hall in London to The British Council Offices in Addis Ababa and throughout his home city of Manchester. His Landmark poem ‘Gilt of Cain’ was unveiled by Bishop Desmond Tutu in The City of London: Sissay’s installation poem ‘what if’ exhibited at The Royal Academy and toured the world in galleries from Tokyo to New York. This highly anticipated event takes place on Friday, 16th September at 9pm at St. John’s Cathedral on John Street and tickets are available now at www.cashelartsfest.com. Early booking is advised. 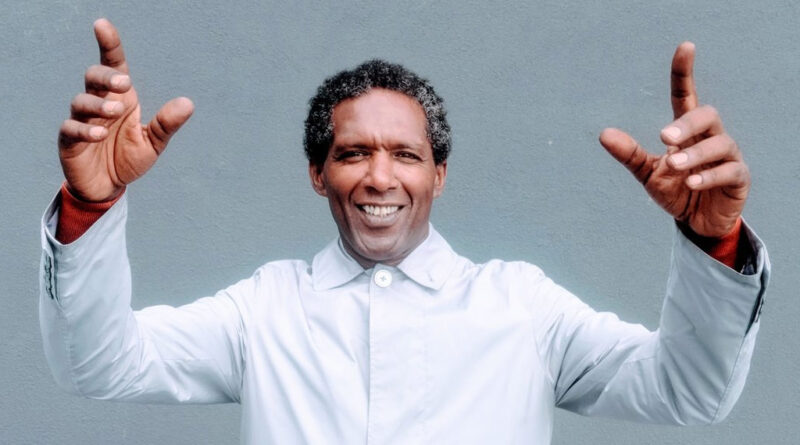 A Joe Lee short film season will take place over the weekend. On Thursday 15th September, there will be showings of FORTUNE’S WHEEL The Life and Legacy of the Fairview Lion Tamer (2015). On Friday, 16th BANANAS ON THE BREADBOARD Stories from the Markets Area, Dublin (2010) will be shown and on Saturday, 17th A BASKET FULL OF WALLPAPER (1998) will be shown once, at 2pm, followed by a talk by the director, Joe Lee and scriptwriter Robert Quinn, who will also answer questions from aspiring film makers about their process. Since graduating from the National College of Art and Design in the early 1980s, Joe Lee has worked predominantly as an independent film and video maker, directing film and television documentaries in a range of art, community and production contexts. Joe’s work includes the arts documentary films Heartfield 1991, Hindesight, 1993 and the fiction film A Basket Full of Wallpaper, RTÉ, 1998. His community-based films set in Dublin neighbourhoods present a unique insight into the recent social history of the city. His public arts projects include Drowned Galway (2020) with choreographer and dancer Ríonach Ní Néill. In 2021 Joe and Ríonach completed a second film project, Portráidí Criathraigh (Bog Portraits) which featured in the Galway Film Fleadh of 2021 and was broadcast on TG4 television. Portráidí Criathraigh will feature in film festivals in London, Toronto, Washington and Belfast during 2022. Admission to this event is free but booking is advisable due to limited space, at www.cashelartsfest.com. There will be three showings on Thursday and Friday at 12pm, 3pm and 6pm and one showing at 2pm on Saturday, 17th, in Cashel Handball Alley on Friar Street. 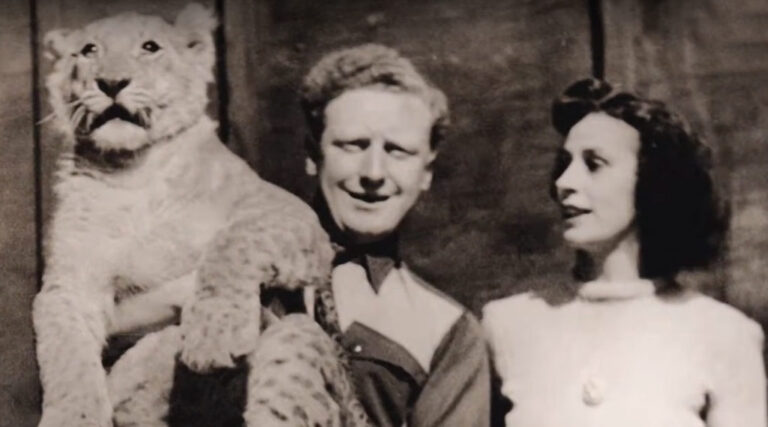 Ceist na Talún takes place at various times over the weekend to explore the question, What makes for a healthy people and place? Join artists Kate O’Shea and Deirdre O’Mahony as they open conversations about these issues through workshops in printmaking, poster making and printing on clay. They will also connect with singer’s groups in the area and invite people to bring in songs of and about Cashel for song/story sessions about farming and land in Tipperary.

Cashel Arts Festival recognises the importance of outreach by working in partnerships with local schools and the community to actively involve them in the arts. The rich cultural history of Cashel and its hinterland has been depicted through the sculpting of life-sized and miniature figures from early Christian times until the recent past. Workshops were given with the expert guidance of professionals Philip Quinn (sculptor) and Elke Wilson (artist). Background research was provided by Maura Barrett of Tipperary Library Services. The models will be on display around the town of Cashel during the festival and were mainly made using natural and recyclable materials. More than 500 students from Primary schools – St. John the Baptist Boys, St. John the Baptist Girls, St Isidore’s School, Boherlahan, Little Flower National School, Ballytarsna and Ballinure National School, in addition to Cashel Community School, sculpted models as part of this collaborative project. 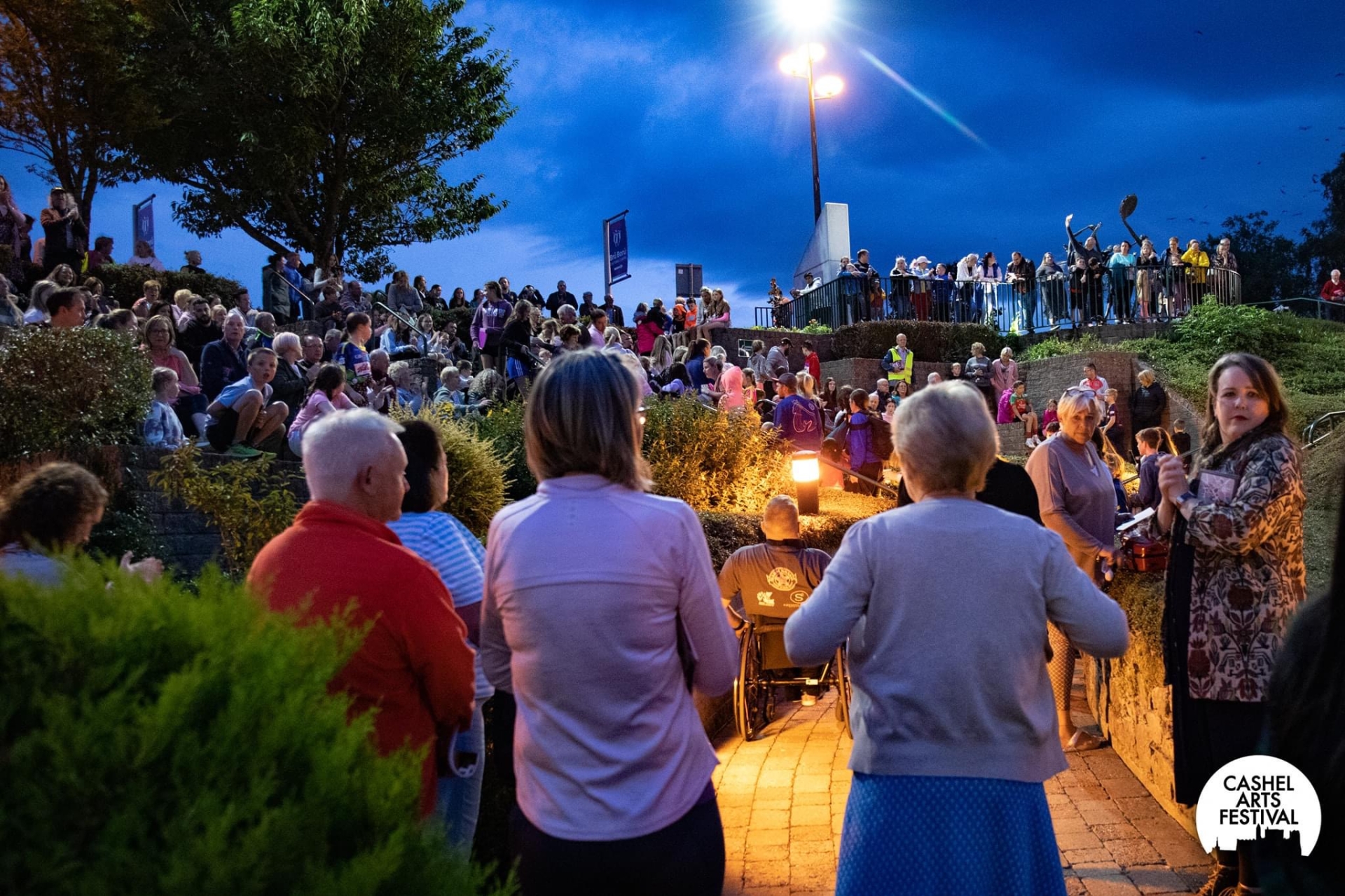 Other headline acts taking place over the weekend are a talk by Lara Marlowe and music by Kris Drever and Immram. Take a look at our website or brochure for more details on these and tickets can be booked at www.cashelartsfest.com.

There are many other events taking place over the weekend, including family workshops, drop in drumming and art workshops, poetry and a wide range of music and film. Please check out our website, www.cashelartsfest.com and find us on social media to see the array of events that we have to offer! Brochures with a programme of events can also be found in local shops and supermarkets. 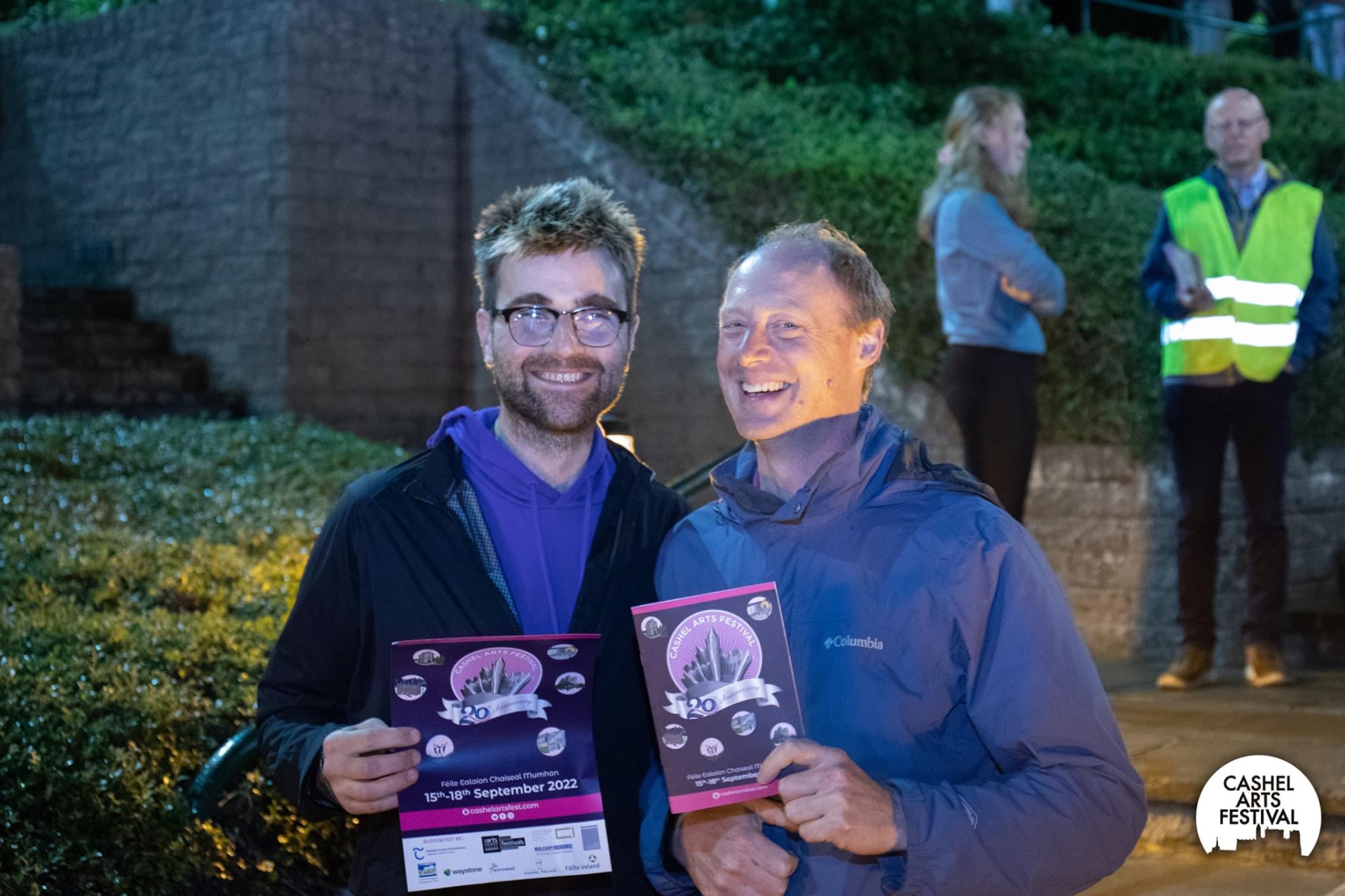 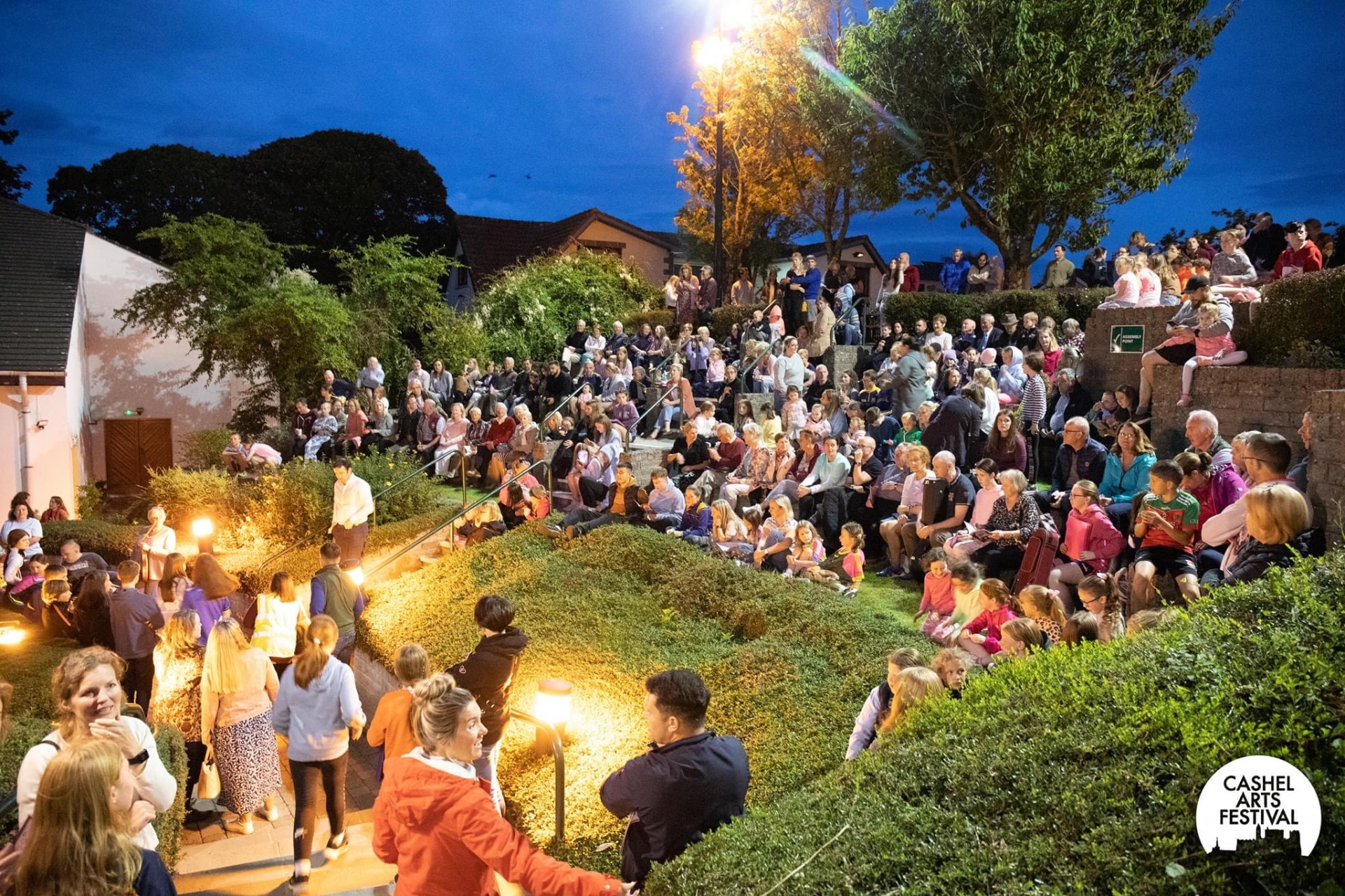