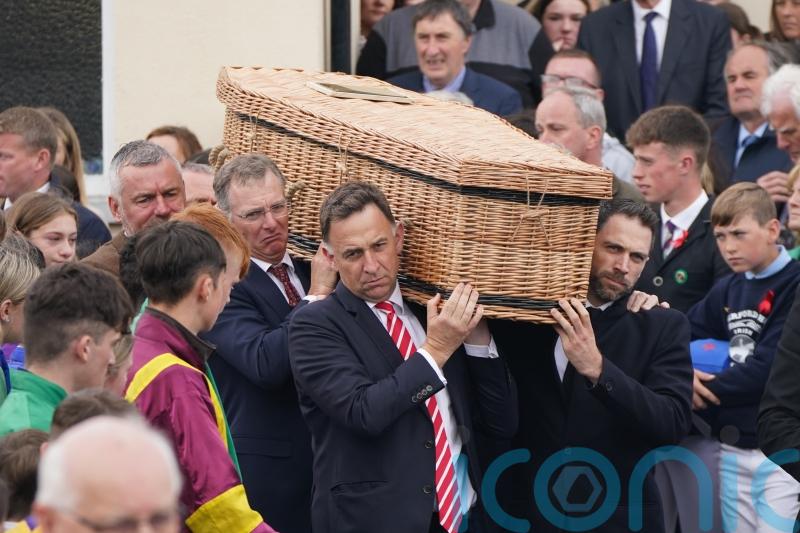 Hundreds of mourners, including prominent figures from Irish horse racing, have gathered for the funeral of the “charming, charismatic” 13-year-old jockey Jack de Bromhead, who died during a pony race at the weekend.

Mourners heard about the colourful life and many interests of Jack, the son of Cheltenham Gold Cup and Grand National-winning trainer Henry de Bromhead.

Mr de Bromhead told the congregation stories of Jack’s “uncanny” knowledge of and love for pony racing that he was “blown away by”.

His death, following a fall from a pony while riding at the Glenbeigh Festival in Co Kerry, caused widespread shock among the Irish racing community. 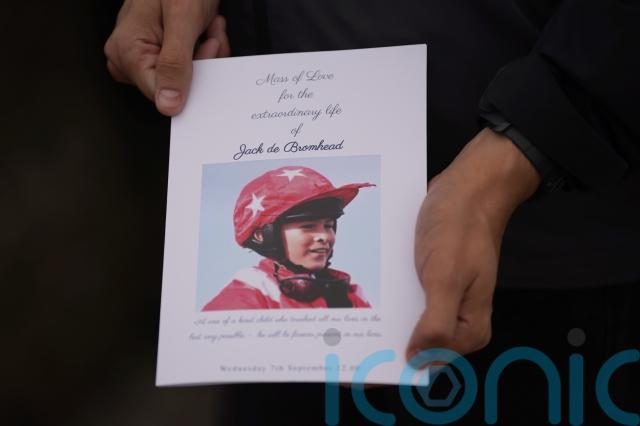 Large crowds gathered outside the church in Butlerstown, Co Waterford, ahead of the ceremony on Wednesday, including prominent jockeys and trainers, while thousands more watched online.

Trainer Charlie Swan and jockey Robbie Power were among the hundreds of early attendees, while jockeys Barry Geraghty and Davey Russell were also present.

A guard of honour of students from Waterpark College lined up outside the church, organised by Grand National champion jockey Rachel Blackmore, with young mourners dressed in racing silks and boots.

One girl was seen holding a teddy pony and the funeral programme while waiting outside the church.

There was a heavy downpour as the wicker coffin was carried from the hearse into the Church of the Nativity of the Blessed Virgin Mary.

During the eulogy, Mr de Bromhead thanked everyone for their support, saying “every person we meet gives you a little bit more strength”. 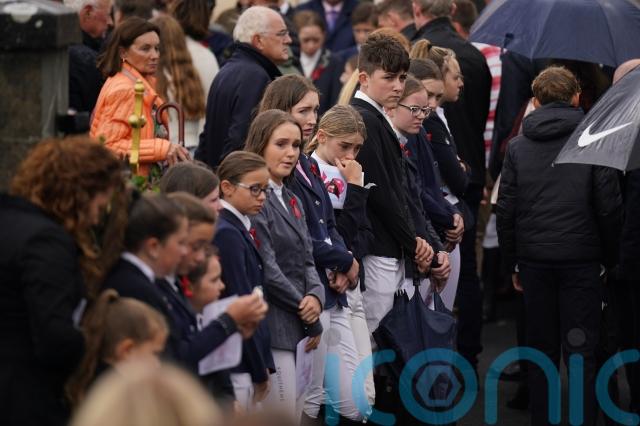 With his wife Heather at his side, he spoke about their son’s love of surfing in Tramore, of farming and driving tractors, of showjumping and of hunting – having once won a hunting horn blowing competition.

Recounting a conversation he had with his son after a fall during a pony race, he told how the youngster had told him: “Dad, I just love pony racing, it is unbelievable, I get such a buzz out of it.”

Mr de Bromhead said: “And he did, you could see it, and this was after a fall. It was incredible. He loved it.

“I said ‘what about the fall, would that put you off a little?’ and he said ‘Hen boy, if you can’t take the falls, you can’t be doing it’. What can you say?”

During a conversation he had with his own mother Sally about Jack months ago, Mr de Bromhead said: “I was saying about school and he’s missing the odd class or whatever, and she said ‘Darling, Jack just doesn’t really have time for school’.”

His grandfather Andrew Moffat told of Jack’s interest in diggers and driving tractors from an early age, and his newfound nicknames for him “grandy boy”; and his father, “Hen boy”.

He said “his interest in tractors and trailers increased at every opportunity”, and he also recounted stories of Jack’s humour and sense of adventure.

Mr Moffat said the tragic accident, at which he and his wife Marian were present, saw “all our hopes and dreams for our beautiful, charming, charismatic, wonderful Jack shattered forever in the fateful riding accident in the dark, murky Atlantic waters washing on to Rossbeigh beach”. 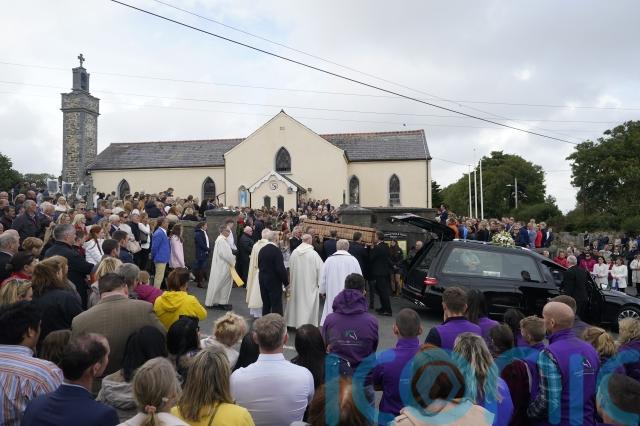 He added: “His horse came down, Jack was thrown, and in an instant, the horse delivered a fateful blow to Jack’s head.

“Our 13 years with our beloved Jack will never be forgotten by his family and all our friends and colleagues, who knew the happiest, loving child you could ever hope for.”

Jack’s younger sister Georgia paid tribute to her brother during the ceremony, saying he “was the kindest, most caring big brother I could ever ask for”.

She added: “He was never scared to stand up for people and was always there for you no matter what.”

His twin sister Mia said in a heartfelt tribute: “Jack, you were the best brother ever, I got so lucky when you were born with me.

“I will miss your cheeky smile that made all my friends fall in love with you.” 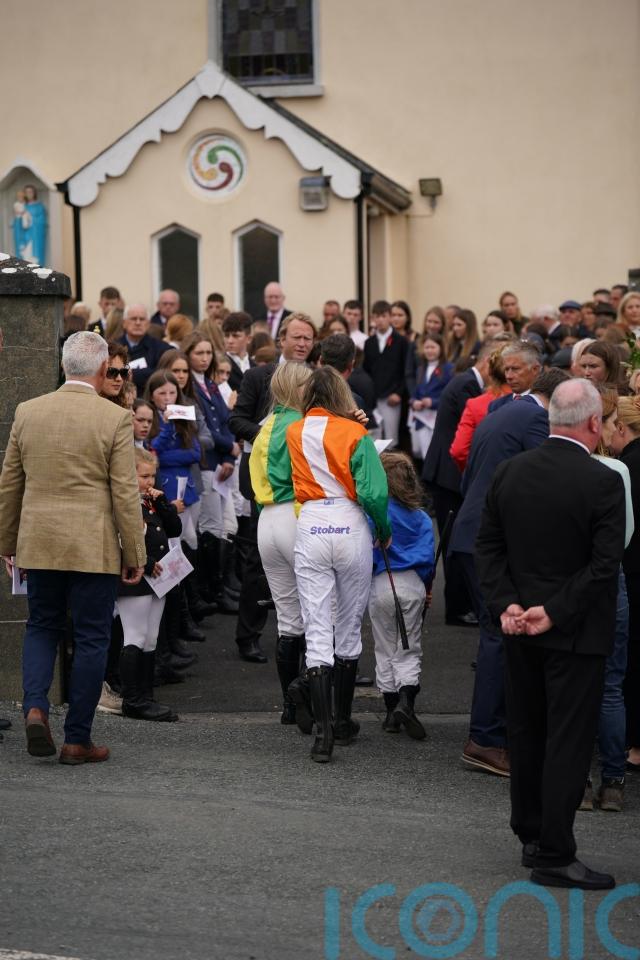 Among the symbols of Jack’s life brought to the church were a horse riding whip, goggles, a rugby ball, Ralph Lauren togs, a hunting horn, and a pair of Nike runners.

A hunting horn was played as the hearse pulled away from the church.

Parish priest Pat Fitzgerald said of Jack during the ceremony: “He knew himself to be loved and he reciprocated in a multitude of ways. In this sense, there was a kind of completeness and perfection to his life.

“As we heard in our reading from the Book of Wisdom, length of days is not what makes age honourable, nor number of years the true measure of life. In a real way, Jack absorbed and lived the essence of life.”