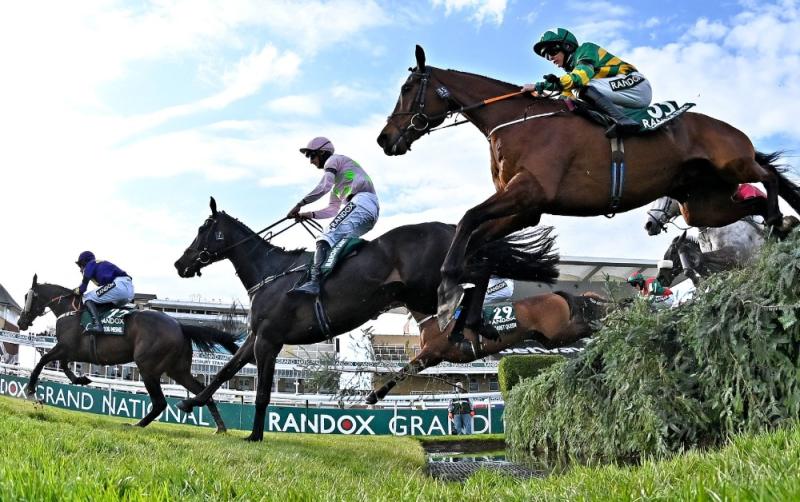 The weights for the 2022 Randox Grand National were revealed on Tuesday afternoon - with the top seven rated runners hailing from yards based in Ireland.

A total of 40 horses will line up for the world’s most famous chase with a £1 million prize fund on offer and the small test of 30 fences and four and a quarter-miles between them and a place in sporting folklore.

The race that stops a nation takes centre-stage live from Aintree on Saturday, April 9 - find all the latest odds and tips at Betfair.

Two of the most recognisable star in the National Hunt game, 2021 Grand National winner Minella Times and hat-trick seeking Tiger Roll have both been handed a rating of 161 and each will carry 11st 4lb in April’s renewal of the world’s greatest chase.

Rachael Blackmore created history last year when becoming the first female jockey to win the race on the 173rd running of the iconic race and Minella Times is 16/1 on Betfair to defy a 15lb rise and hand owner JP McManus his third win in the race.

Connections of Tiger Roll will still be hoping he can emulate the great Red Rum and win his third Grand National - he is 25/1 to do so.

Tiger Roll was denied a chance to make history by winning three successive renewals of the contest when the 2020 contest was cancelled owing to the Covid-19 pandemic. Owners Gigginstown House Stud decided not to run their superstar in the 2021 Grand National owing to the weight he was allotted by the BHA’s Chief Handicapper Martin Greenwood. However, the owners and trainer Gordon Elliott have both suggested that a tilt at the 2022 contest is on the agenda after he attempts to win a third renewal of the Cross Country Chase at the Cheltenham Festival.

Gigginstown and Cullentra trainer Elliott are both responsible for some of the leading contenders for this year’s contest along with those towards the top of the handicap, including Irish Gold Cup winner Conflated who is 50/1 to claim victory off top-weight of 11st 10lb.

The formidable duo boast eight horses in the top 40 currently qualified to run in the race, including recent Punchestown Grand National Trial winner Death Duty (25/1) and Troytown hero Run Wild Fred (16/1) who is also a warm order for the National Hunt Chase at next month’s Cheltenham Festival.

With a total of 19 entries, Elliott’s main hope of a fourth Grand National currently sits with the market leader and joint top-weight Galvin, who is one of six co-favourites with Betfair at 16/1 to land the contest, having been allotted 11st 10lb. He will first contest the Boodles Cheltenham Gold Cup at Prestbury Park.

The consistent Melon (40/1) has been given 11st 6lb as he bids to provide the Cloustton maestro with a second win in the race following Hedgehunter’s 2005 win. Mullins also could saddle Burrows Saint who finished a fine fourth in the 2021 running and Brahma Bull (66/1).

Chris’s Dream will carry 11st 5lb in his quest for de Bromhead’s second success in as many years, and is 50/1. Ted Walsh saddles Any Second Now as he looks to record his second win in the race following Papillon’s iconic 2000 victory. Any Second Now, who runs in the colours of JP McManus was a fine third in the 2021 running having been badly impeded during the race and he runs off 11st 2lb, whilst Easysland (33/1) who made his first start for Jonjo O’Neill earlier this month is also off the same weight.

Robert Waley-Cohen swooped to purchase Noble Yeats for his son Sam to ride in this year’s race on the eve of the Grand National weights lunch and Emmet Mullins’ star looks a fascinating runner off 10st 4lb, the same as last year’s Grand National favourite Cloth Cap. However, down at 53rd in the list, connections of Noble Yeats (33/1) face a nervous couple of months to see if he makes the final field of 40.

Two of the most interesting contenders are Snow Leopardess (16/1) who cemented her claims for the Grand National when scoring at Exeter earlier this month. Already a winner over the Grand National fences this term, she looks a fascinating player off 10st 3lb, but is currently 57th in the list.

Longhouse Poet bids to provide Martin Brassil with his second victory in the race and follows the same route taken by his 2005 hero Numbersixvalverde having won the Thyestes Chase last time out, before heading to Aintree. A handicap mark of 155 sees him allotted 10st 12lb and he looks a serious player in what looks a Grand National full of quality.