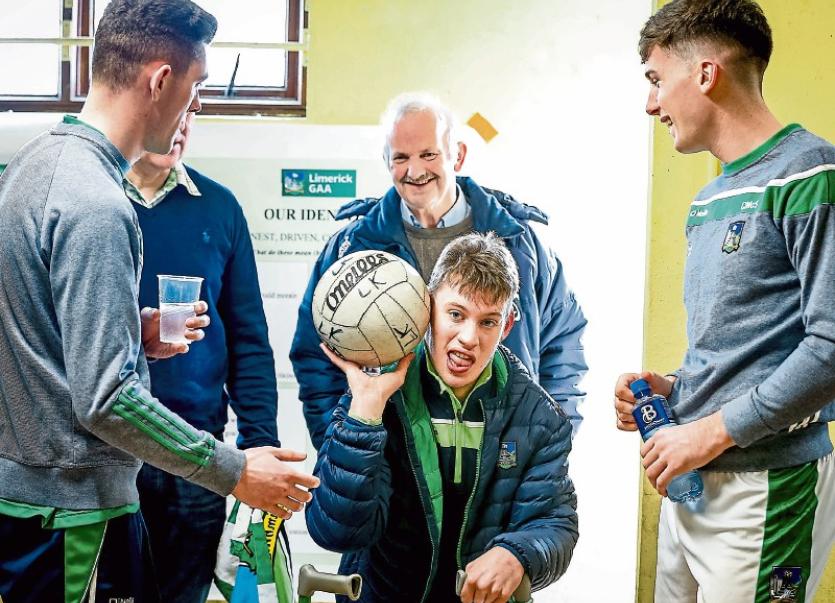 A YOUNG Limerick man with severe cerebral palsy had a 22nd birthday to remember – thanks to the county’s footballers.

Darragh Ryan travelled with his father Sean from their home in the Ennis Road to Kilmallock’s Fitzgerald Park, where the football panel lined out against Leitrim.

And despite the team’s heartbreaking one-point defeat, the young man left smiling after being given the red carpet treatment by manager Billy Lee and the kind-hearted team.

“It’s fantastic to have a young lad like this and to make his day, to make him party to what is going on behind the scenes on a matchday is great. It’s our privilege to have him with us,” said Newcastle West man Billy.

Before the game, Darragh – who has attended most of Limerick’s football matches in recent years – was invited into the dressing room, where he heard manager Billy give his pre-game talk, before the team came up, and thanked him for his ongoing support.

He had the best seat in the house, as the footballers took on Leitrim in the top of the table clash.

The best was still to come for him though: for after the game, he enjoyed a meal with the team, before they presented him with a cake to mark his birthday.

And Darragh’s favourite player, the full forward Jamie Lee, presented him with a Limerick jersey signed by the team, while there were further gifts of a training kit and socks for the superfan.

Speaking to the Limerick Leader, Billy explained the idea to have Darragh as the side’s guest for the day came after the team posed with him following their round two victory against Waterford in Rathkeale – a framed picture of which was also presented to the lad.

Sean said this will replace the poster of Lionel Messi that his son has on his bedroom wall!

”I don’t know how the picture materialised, but it did, and when I saw the photograph doing the rounds on social media, I said to the chairman Gerry we should invite him in and have him as our guest for the day,” he explained.

The footballers’ joint captain, goalkeeper Donal O’Sullivan, who represents Monaleen, said: “He’s obviously a big supporter of ours. He came to our game against Waterford and we got a great picture with him. It’s great to have him involved in the dressing room before the game. To have supporters like this backing us and the Limerick team really helps us.”

Darragh’s father Sean said: “Darragh was incredibly excited to be able to meet the players in the dressing room. He is certainly happy as you can see. We’d love to see Limerick progressing, as they’ve been through some very lean times. There were successful years when they got to Munster finals. We’d like to see them reaching that stage again. Hopefully they will get out of division four as soon as possible too.”

Twenty-two-year old Darragh responded with a wide grin and a thumbs up to this!

“This is the best ever birthday present for Darragh. He’s 22-years-old today and hopefully he won’t ever forget the day,” Sean added.

Chairman of the football committee Gerry Phillips said the footballers were only too pleased to welcome Darragh, the players and management were “anxious” to organise something as soon as the picture was taken in Rathkeale.

“This is what they are all about. They are real ambassadors for the county. The footballers put in every bit as much as the hurlers, but sadly sometimes the results go against them,” the Monagea man added.

Sadly, it was an injury time point from Leitrim which denied Limerick a draw against the league leaders.

The panel will try to make amends with a home tie against Derry this Saturday, throw in 1pm at the Gaelic Grounds.

Expect Darragh to be there, cheering again in the stands!