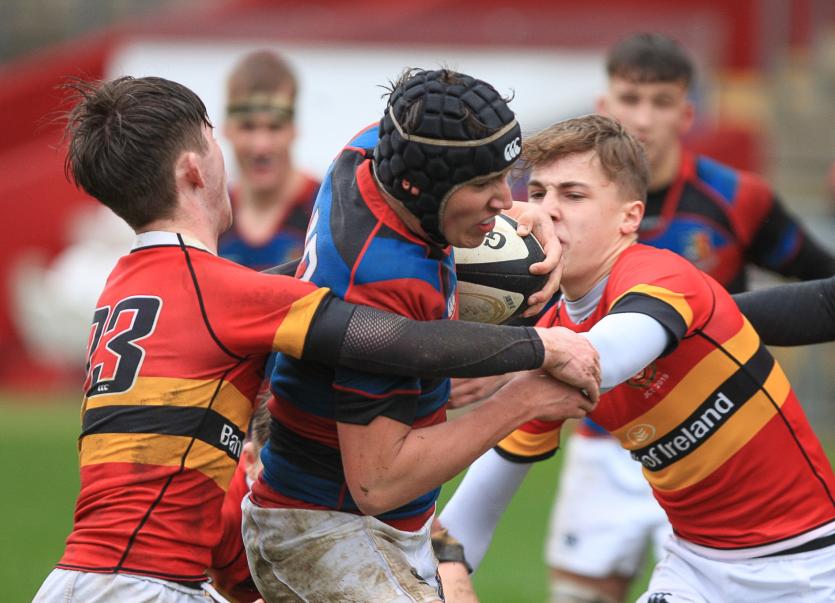 HOLDERS St Munchin's College powered their way into the semi-finals of the Clayton Hotels Munster Schools Junior Cup after scoring a thrilling 31-24 quarter-final victory over a fancied CBC side at a wet Thomond Park this Friday.

Gritty St Munchin's College recovered from falling 14-0 in arrears inside the opening quarter, to outscore their opponents by five tries to four and deservedly earn a semi-final showdown with local rivals Castletroy College.

Centre Joshua Costello bagged a hat-trick of tries for the winners, while prop Gus Harrington and impressive second-row Stephen Hayes also dotted down for the Corbally side who won the Junior Cup for the first time in 20 years last March.

This was a splendid display from a well-drilled St Munchin's side who played the wet and greasy conditions extremely well. Their forwards worked tirelessly all through, making countless carries and tackles.

The winners were disciplined, controlled and patient in attack with the likes of number eight Konrad Jezierski, second-row tryscorer Hayes leading the way, while Costello's centre partner Liam Angermann turned in a powerful second half display, especially in defence.

CBC made the better start in the difficult wet and greasy conditions, with number eight Kevin Roche rampaging over for a ninth minute try. Christians' scrum-half Andrew O'Mahony also added the conversion for a 7-0 lead.

O'Mahony also added the conversion to help the visitors into a 14-0 advantage.

To their credit, St Munchin's fought back strongly and were rewarded for their endeavour when, following a neat chip in behind the Christians' defence from out-half Cillian O'Connor, centre Joshua Costelloe won the race to the touchdown to score.

While the conversion was missed, the Corbally nursery were right back in the contest on the stroke of half-time. From a five metre scrum awarded after a CBC player had carried the ball back over his own tryline, St Munchin's edged their way closer to the Christians' tryline before prop Gus Harrington dotted down. Out-hallf O'Connor duly converted.

At 12-14 at half-time, it was certainly a case of game on for the large and enthusiastic attendance.

St Munchin's made the ideal start to the second half when edging in front for the first time. Using the 'pick and go' to telling effect deep inside the CBC '22, their powerful and hugely influential second-row Stephen Hayes touched down.

Collins also added the conversion for a 19-14 lead for the Limerick side. Back came CBC, however, and the Leesiders grabbed their third try of the game to draw level when flanker Conor McNamara touched down.

The conversion was missed, but the scores were tied at 19-19.

There was no time to draw breath however, as see-saw nature of the scoring continued when St Munchin's centre Costello intercepted the ball close to half-way before blitzing his way over the tryline for the Corbally side's fourth try.

The drama was far from done however. CBC flanker McNamara was the first player to bag a hat-trick of tries in the game when he touched down in the left corner on 50 minutes to reduce the St Munchin's lead to two points, 26-24.

The match-clinching score arrived in the final minute of normal time. From a penalty awarded inside the Christians' 22, Munchin's opted for a scrum. St Munchin's opted to keep it tight initially in the wet conditions, before moving the ball right for Costello to touchown and complete his hat-trick.