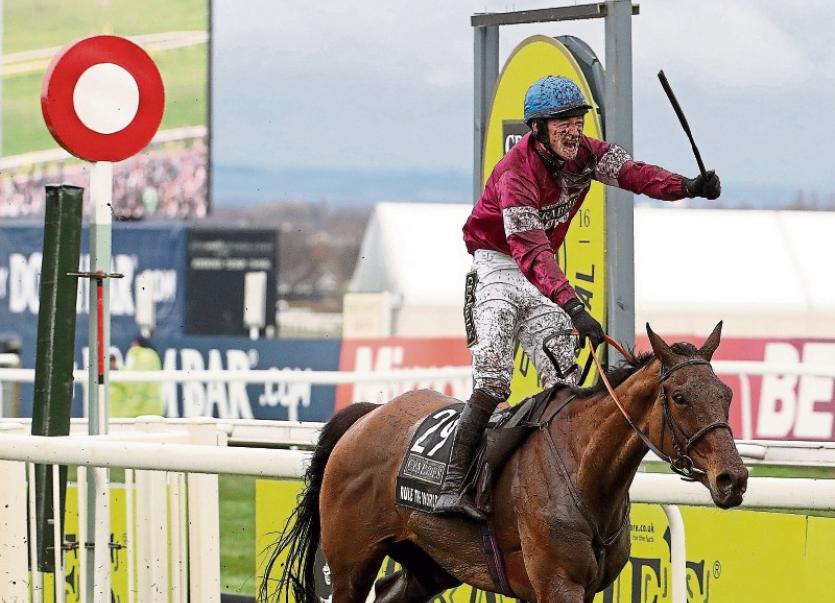 The biggest steeplechase in the world hits our screens at 5.15pm on Saturday, April 6, and it's a time for the casual punter to have a bet. Everyone from hardened racing fans to plucky have-a-go heroes will wander into their local bookies' shop with the hope of backing the winner. If you're struggling, our man has picked out his top three picks for the 2019 Aintree Grand National below.

I'm going to get this out of the way now; I hope Tiger Roll makes it back-to-back wins in Liverpool but at 4/1, he's far too short for the average Grand National punter.

With that in mind, I've picked three eachway options worth a punt on anyone's ticket with the first being JURY DUTY (20/1). One of Gordon Elliott's 11 runners in the race and a solid and stout stayer. He'll be taking his first spin over the larger Grand National fences but everything he's done of late suggests he'll relish it. I like this horse most because of his consistency. He's won or placed in nine of his 11 chase starts to date, winning three of those, including his most recent run at Down Royal during Cheltenham week. That was just his third start at a trip further than three miles and while he unseated in the four-miler at Cheltenham in 2018, he was third subsequently at Punchestown where the winner of that Cheltenham four-miler, Rathvinden, was fourth. Rathvinden re-opposes here but is a much shorter price despite the fact that Jury Duty has been handed a handier weight.

Next up I'll be putting a few bob eachway on WALK IN THE MILL (28/1). This one is right down the weights and is another that looks like he'll lap up the longer trip. Another bonus is his course form back in December when he won the Becher Handicap Chase over these fences, albeit over a shorter three-mile trip. Looking at that piece of form more closely, he had a host of these rivals behind him that day, including Ultragold, Vieux Lion Rouge, Just A Par and Ballyoptic. He was also doing his best work late, despite making a couple of mistakes at his fences, bounding clear from the elbow to the line. He prepped for this with two respectable third-place finishes in moderate chases at Chepstow and Exeter but this would have always been the target. Look out for him arriving late if he stays on his feet.

I can't ignore ROCK THE KASBAH (18/1) under top jock Richard Johnson. For a classy horse over both hurdles and fences, he has very few miles on the clock and has a nice profile for a Grand National challenger. He's had just seven race starts since April 2017 and hasn't run since December this season. He proved an awful lot to me at Cheltenham's November meeting in 2018 when he stormed up the hill to take the scalp of former Gold Cup winner Coneygree and a number of other top performers. A few of them will re-oppose here and while the extended trip is an unknown, that run came on similar ground and with a quiet and hopefully clear ride from Johnson, he can edge closer towards the latter stages. He looks to me to be made for the longer trip and would be a popular winner.

Finally, if these odds are not quite big enough for you, another one at a huge price I thought might go well is LIVELOVELAUGH at 66/1 for Willie Mullins. He has flattered to deceive in a number of starts recently and needs a lot of luck, but stamina fears are eased somewhat by his basement weight.